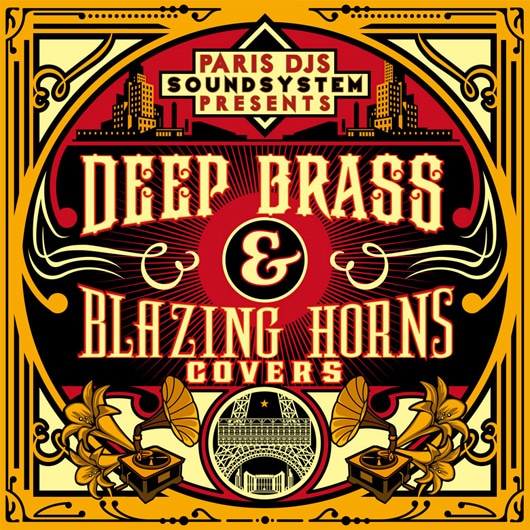 Oh Oh Oh ! What better way to celebrate Christmas and New Year than a big surprise. Something like a funky Santa Claus playing horns in a big band or maybe a very special guest for the Christmas Eve ? Hey why not both because as part of a special project launched by the mighty Paris DJ’s team to celebrate the 400th and last episode of their famous podcast, I’m really pleased to host today one of the rockets of their closing ceremony’s firework.

10 different blogs or websites run by people supporting us, collaborating with us or just following us have accepted to host an exclusive thematic mix of covers, in the vein of our cult Molesting Laura series, mixed by Grant Phabao & Djouls from the Paris DJs Soundsystem and illustrated by Ben Hito. One more mix in this series will be offered on Paris DJs, between dec. 25 and dec. 31st. This mix will be the 400th one posted on the site and the last one of the Paris DJs podcast. As with the closing part of fireworks, we wanted to do a “bouquet final”, releasing 11 mixes in just a few days…

But this is not the end, Paris DJs is now a label releasing something new every week, with lots of surprises and collaborations to happen in 2013. We intend to keeping on painting the Internet wind in many ways. Thanks for staying connected.

Thanks to them I’ve discovered so many tunes (mainly gathered in the Afronomy series) that I sincerely wish good luck to all the team and hope they’ll keep providing us such high level quality music through their label and other projects.

And now the music…. You can start the blind test. Champagne someone ?

10. The Soul Rebels – Sweet Dreams Are Made Of This
(Eurythmics cover, from “Unlock Your Mind” album, 2011 / New Rounder)