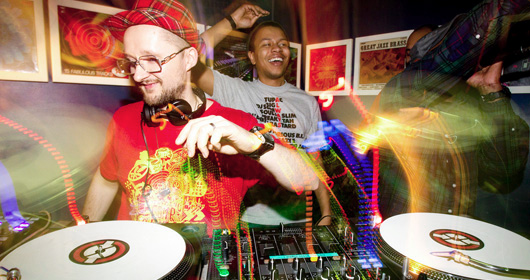 I can nearly remember the place where in 1996 I’ve heard of Ninja Tune for the first time. The Ninja Cuts : Flexistentialism compilation was just released and I discovered artists like Funki Porcini, the Herbaliser and Up, Bustle & Out. It was nearly 20 years ago and many things have changed since but looks like obstinacy and creativity of one of the main actor of this amazing label’s beginning remain intact…

Indeed, Dj Vadim is tirelessly exploring all facets of Hip-Hop, Reggae and Dancehall since that time in his big discography composed of 10 studio albums (last one, Dubcatcher, has been released yesterday, grab it !) and countless EP, remixes and compilation, building bridges between these musical worlds while making crowds dance around the world. An heavyweight…

That’s why it’s such a real big pleasure for me today to host someone like Daddy Vad, specially for sharing a one hour long Reggae fine selection he’s describing himself like a “mix to get your summer started right. Perfect accompaniment to the BBQ”…

So guys, turn sausages over, open a beer… and enjoy the vibe !!